people in a cafe 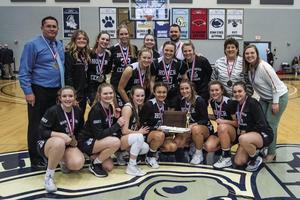 CRESSON -  The third time was the charm for the Homer-Center girls basketball program.  On Thursday the Lady Wildcats appeared in the District 6 Title game for the third time, and captured the crown for the first time in their history with a 54-36 victory over Bishop McCort at Mount Aloysius College.
The Wildcats trailed by nine at the half, but ratcheted up the defense, and got hot on offense to quickly erase the deficit, taking their first lead of the game midway through the third quarter.  A lead that they would never relinquish.  The Lady Wildcats were lead in scoring by junior Macy Sardone, who netted 25 points, and pulled down 13 rebounds.  Senior guard Marlee Kochman was the only other Wildcat to hit double digits, with 12 points.
The second half featured strong rebounding, lead by junior Molly Kosmack, who pulled down 18 rebounds, and tight defense.  The Crushers only scored nine points in the second half.  Next for the Lady Wildcats are the Class AA Inter-District playoffs.  This year the PIAA is using the higher seeds home court to play the first round of the PIAA playoffs.  The Lady Wildcats will play on Tuesday, March  8 against the seventh seed from District 7.  The game time is TBD, and the opponent will not be known until the completion of the WPIAL championships this weekend.
(Photo Credit: Bob Leslie, Indiana Gazette)
Inter-District Playoff Game Ticket Information:
The PIAA uses online tickets sales only.  The tickets have not yet been released for purchase, however, you can follow this link to get to the tickets:
Directions:
1. https://www.piaa.org/sports/tickets.aspx?from=hellobar
2. Click basketball
3. Click Girls Basketball
4. Click 2A
5. There will be a link for the Homer-Center game.  (NOTE: THE TICKETS  WILL LIKELY NOT BE RELEASED UNTIL THE CONCLUSION OF THE WPIAL TOURNAMENT.  Keep checking the PIAA link through the weekend.)